But more on that in a minute.

In the past couple years, I’ve been quietly preparing to die.  I hadn’t told anyone the full extent of what was going wrong with my body, because it was inexplicable.  Whenever I aspirated and got an infection, I became much weaker than the infection should have made me.  Sometimes I became severely weakened by stress alone.  I knew that there was something going on above and beyond the medical conditions we were aware of.  But I also knew that my symptoms could come from so many different things, it was unlikely we’d ever find it, or that it would be something treatable.

In parts of the chronic illness community, people use a term called ‘spoons’ to describe how much energy you have to do basic things.  I have mixed feelings about the idea, and the Spoon Theory story that originated the practice.  But sometimes it’s a useful thing.  What happened when I got sick was that my spoons would go negative.

When I say negative spoons, I’m not just saying I really didn’t have much energy.  I don’t mean that I felt sick and tired in any way that even the average chronically ill person feels sick and tired.  I mean that I felt like my level of energy was spiraling downwards in a dangerous way.  Where the less energy I had, the less energy I had to replenish it.  At my worst, I would be lying in a hospital bed, going in and out of delirium, and in lucid moments I would notice that it took too much energy just to keep my heart going.  I’d wish that I could stop and rest.  And then I’d realize what that meant.

When I was not acutely ill, I had a constant, subtle sense of fragility.  It felt like one good illness could put me in the hospital or kill me.  And often it did.  I had four hospitalizations between late 2012 and early 2013.  More recently, I was having periods of time when for no reason at all, I’d become unable to move or stay conscious for long.  I knew something was badly wrong.  And apparently so did my doctor, because he started sending me to more specialists and running tests.

This was the result:

What does this mean?  When they measured the level of cortisol in my blood, it was consistently too low to be measured.   ACTH is a hormone secreted by the pituitary gland that tells the adrenal glands to make cortisol.  My ACTH was too low to be measured as well.  When they flooded my system with ACTH, I made some cortisol, but not as much as they might have expected.

And what does that mean?  It means that my pituitary gland isn’t making enough ACTH, and hasn’t been for a long time.  And that my adrenal glands have therefore not been making enough cortisol.  I have something called severe secondary adrenal insufficiency.  We don’t know the cause yet.  But the upshot is that it’s extremely treatable.  I’m on a steroid called dexamethasone, that replaces the cortisol my body can’t make.

That health crash I had six years ago?  The one I worked hard to conceal until after the worst was over, because I was afraid of being bullied for having too many medical conditions?  Where every single health condition I had took a nosedive, I ended up bedridden, and needing a power chair, and all kinds of changes took place?  We now think that was the time that the adrenal insufficiency became serious.  It may have been around for quite some time after that.  And if we hadn’t treated it, my expectation that I wouldn’t live to see forty, may well have been accurate.

On dexamethasone, I improved rapidly.

Prior to dexamethasone, I could not jump even when holding onto a grab rail.  On dexamethasone, I could do jumping jacks.  First five, then ten, then twenty, then forty.  Before, I couldn’t walk up one flight of stairs.  Now I can walk up and down eleven.  I’m walking everywhere with a cane now, and barely even needing to use the manual wheelchair I bought (thinking that it was more realistic that I’d need a manual wheelchair than that I’d start walking everywhere — I still do need it sometimes, but not that often). I can do 400 meters on a treadmill, I am starting to be able to run (my legs wouldn’t even move that way before) and skip and balance on one foot, and all kinds of other things I thought I’d lost forever.  I’m going on walks in my neighborhood.

Perhaps most amazing is the way I feel after exercising.  In my entire adult life, I have never felt this way:  When I exercise, I feel invigorated afterwards.  I feel more energetic after exercising than before.  This is entirely different than before, when even minor exercise made me throw up, collapse, or both, and could leave me sick and with my body temperature running high and low for weeks.

And this is amazing and magical and wonderful.

But every time I try to talk about this with a nondisabled person, or even with many disabled people, I run into a very ableist way of thinking about this:  The miracle cure story.

It runs sort of like this:  A disabled person has been hanging in the balance between cure and death (because what other possibilities are there for a disabled life?).  Hope means finding a cure, despair means not finding a cure.  They do find a cure and everyone rejoices and everything goes back to how it should’ve been (with them not disabled, of course) and things are great from there on out.

I will be on steroids for the rest of my life, according to my doctors.  If I don’t take them, everything goes back to how it was and I would eventually die.

I have to keep injectable steroids around, because it’s that important that I get them every single day, even if I have a stomach bug or a clogged feeding tube.  I don’t have any other meds where it’s so important that the doctor has insisted on injectables.  Even meds that are dangerous to go off quickly. 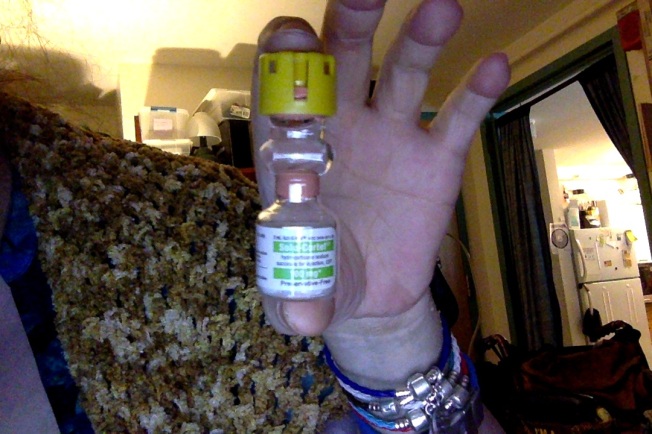 Any time that I become stressed out or sick, my symptoms come back and I have to take more steroids.  This puts me at higher risk when sick, hospitalized, injured, or severely stressed out.  To give an example, when I found out my mom had been in the ICU, I went from feeling great, to too weak to breathe easily, in a matter of seconds.  And when I run down my stress hormones like that, I don’t make new ones, so I have to put them back artificially, it’s called ‘stress dosing’.

I have to be constantly aware of my body and of my stress levels and other factors that affect how much steroids to take.  And I have to largely play it by ear.  There is no blood test to tell you if you’re on enough steroids or not.  You have to learn that yourself.

This is wonderful, but an inspirational fairytale ending it ain’t.